Kelsey’s Restaurant in Thunder Bay is renovating, and getting rid of everything in a silent auction on May 5, 6 and 7. Collectors and bargain hunters alike are finding the auction a unique place to shop for essentials and mementos, including a giant hippo head, carousel horse, and vintage neon Miller Lite sign.

The restaurant, which has been on Memorial Avenue for 19 years, is doing a complete overhaul to adopt new brand standards, said owner Claudio Foresta.

The auction has more than 500 items listed, including countless pieces of memorabilia that have lined the walls of the restaurant.

“It’s all got to go,” said Monique Crago, who has worked at Kelsey’s for 13 years and is organizing the auction.

Hundreds of pictures and knick knacks are stacked throughout the restaurant, up for auction. (Clare Bonnyman/CBC)

Monique Crago has worked at Kelsey’s for 13 years, and is organizing the silent auction. (Clare Bonnyman/CBC News)

Everything from Antonio Banderas to Lucille Ball was featured on the restaurant’s walls, and is now up for grabs. (Clare Bonnyman/CBC)

“There was a lot of stuff on the walls,” said Crago. Including old instruments including trumpets, trombones, clarinets and guitars have hung on the walls for years, true antiques pulled out of storage. (Clare Bonnyman/ CBC)

Claudio Foresta has been the owner of the restaurant for 16 years. (Clare Bonnyman/CBC)

The giant hippo head resting on the wall is one of the more popular items, with bids placed within the first couple of hours. (Clare Bonnyman/CBC News).

Rob Cain, Pastor at Slate River Baptist Church, said the auction was a unique opportunity to shop with his four-year old daughter Ellie.

Cain is opening up a coffee shop at the church and was on the market for some chairs, tables and bar stools, almost 100 of which are being auctioned off by Kelsey’s. Ellie, on the other hand, was drawn to the carousel horse.

“There’s a lot of good stuff here on offer,” he said, but the variety of items is tempting.

“Once you start  looking around at things you kind of want things you didn’t think you wanted when you first came in. It’s difficult to control yourself.”

In the 19 years since the restaurant opened in Thunder Bay, Ont. a lot of diners have sat and eyed the knick knacks lining the walls. (Clare Bonnyman/ CBC)

The renovations are due for the restaurant to meet new brand standards for the Kelsey’s chain, and the sale allows collectors in Northwestern Ontario a chance to grab some mementos. (Clare Bonnyman/CBC)

Rob Cain and his daughter Ellie, four, sought out the sale for some tables and chairs. (Clare Bonnyman/CBC) 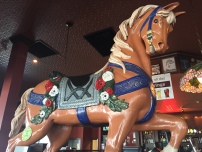 The carousel “horsie” caught the eye of four year old Ellie, but already has several bids. Not everyone who comes will get what’s on their wish list. (Clare Bonnyman/CBC)

A Miller Lite beer sign is among the hot ticket items up for grabs, aside from the hippo and horse, of course. (Clare Bonnyman/CBC)

Even the silk planters are up for auction. (Clare Bonnyman/ CBC).